Before the Chelsea match in Jan 2020, Arsenal Australia members was given the VIP treatment by The Arsenal, which included going behind the scenes before the match to greet the Players Coaches; and going pitchside post match to meet Lucas T.

Here are some notes from Michael Newman, which are to be featured in the Matchday Programme vs Sheffield United.

“A lifelong pilgrimage to the Emirates after all these years finally complete! As much as a win would’ve obviously been preferred, it was nevertheless an experience that I, alongside many others from Arsenal Australia will never forget. I also really liked how despite the stature that our club has, there has been a very active willingness to convey the history of the club around the stadium. Whether this comes in the form of statues encapsulating iconic moments such as the Adams’ 4-1 98’ winner, or quotes from the myriad of other legends around the stadium, there was something very personable about this that made me feel proud that the Arsenal has done this to connect with us as the fans.

There’s also of course the sense of excitement that comes with Arteta now at the helm. Again it was a shame that we came short at the end, though there was however a clearer structure in our short-passing interplay in which I hope that this becomes all the more apparent as time goes on. At the same time, this, alongside getting a more comprehensive idea of Arteta’s philosophy will require patience as well as the fans to unite together. The latter of these points is especially crucial for all of us to recognize, and it was also great to see this in action during the Chelsea game where you could get a tangible sense that the fans were galvanizing the players. All in all an experience that I will cherish for the rest of my life and hopefully the first of seeing many more games. COYG!” 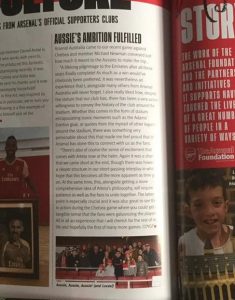